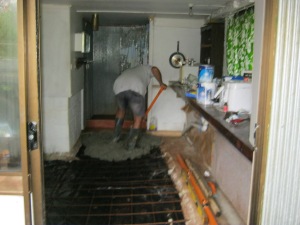 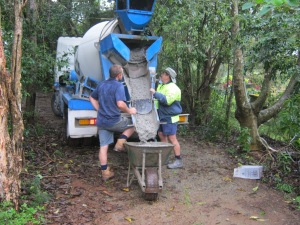 A month since the disaster hit! Finally it stops raining long enough to pour concrete and dry enough to get a mini-crete truck down the driveway. Meanwhile I’ve received no money from insurance and this has to be paid for out of my meagre savings. I’ve said no to Xlibris to their 2 for 1 offer to produce my next 2 books and am concentrating on getting back my space downstairs to the condition it was in before the flooding.

Meanwhile Kadadu Dreaming is now getting over 1000 hits a day on the blog site. I don’t know if anyone is buying the book, but there are lots of positive comments on my writing ability and my blogsite ability. Some commenters seem to think I know everything about building a blogsite. Really, they have higher expectations than I do. As I said in the beginning its all trial and error.

Just a short exciting update. On going through the comments(I read them and include anything unusual): Someone wants to translate the blog site into Chinese. How amazing is that! I suspect people are getting more than they bargained for with me. I think they are tapping into my Higher Self. Like in the book : Finding your way in a Wild New World – Reclaim your true Nature to Create the Life you Want by Martha Beck

I’ve just been reading a very good book about this. `Finding your way in a Wild New World’ Reclaim your true Nature to create the Life you Want by Martha Beck. Its in my local library and its what I’ve been on about in my poetry. Its time I met my rhinoceros. 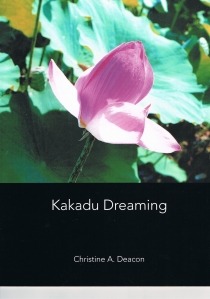 Spoke to Anne Razel at XLibris and she is looking into my problem: that the XLibris bookshop does not come up with Kakadu Dreaming when I type it into the search engine. When she types it up in US, it does come up with my Kakadu Dreaming book. The question is why? To me it appears that people wanting to order my book from XLibris, can’t do so. Is the XLibris site not updated in Australia?

Anyway Kakadu Dreaming is now up on Amazon.com and Barnes and Noble and you can order an ebook or a softcover. They have even sold some copies and it has only been up for a week! They have offered a special deal to publish my next 2 books. I’m holding off until I can see some results from this one. Meanwhile I’m cautiously optimistic.

On the recovery front from the cyclone, I’ve received a quote to repair the damage and will proceed, subject to finance and preparation work will start tomorrow.

Since this was to be my first ebook, I looked for ebook publishers. The first I tried was Lulu.com. Despite a lot of difficulties in getting my books onto the site, I did succeed in offering them for sale. They has an ISBN and and were listed for sale.
I was having trouble downloading them myself, but I thought this was probably my inadequate computing power and server problems, but they were not selling.
I did a design on Lulu which is now offered for sale. I didn’t order one, but I have now after reading this: http://writersweekly.com/the_latest_from_angelahoycom/007040_11172011.html

When I was unhappy with the design and in spite of thinking, I’d like all my books in one place, I tried Blurb.com They had a superior design, I could see that. So I went ahead using Bookify, one of several programs they offered. I was happy initially, when I received copies, but needed to alter one or two typos which had slipped through and some photos they identified as being inadequate.

I altered it on line and reordered more copies. Unfortunately the second lot I ordered, had reverted to
the original draft. This was unsatisfactory and I complained and changed publisher again. I had to pay for the copies plus expensive (over priced) postage and I couldn’t sell them, they were not up to standard. http://forums.blurb.com/forums/5/topics/13515

The third publisher XLibris rang me. I may have made an earlier inquiry. They persuaded me to publish with them because they said the book is always in print as they have it in their bookshop and it can be ordered anytime. Blurb were saying it would go offline if I didn’t keep ordering books. I paid for republishing and ordered the Marketing Package for on-line promotion which would promotion the book on-line, including banner ads and an email campaign. Meanwhile I was still progressing myself through establishing a site to promote it, here on WordPress and following the guidelines I’d read online.
http://www.scambook.com/report/view/65902/XLIBRIS-PUBLISHING-COMPANY-Complaint-65902-for-$100,000.00
I was progressing slowly, I now had a cover and a printed copy from XLibris, but still no Bookshop entry, only the Blurb.com previous site. Are they affiliated with Blurb? Is that how they got me as a contact.

The next approach from XLibris was to ask me (sell me) on being represented in book fairs coast to coast in USA. They wanted another $1400 to do this. They were feeding me a dream. I had wanted

to go on American market when it was published. I almost said yes, but fortunately at that point I looked up XLibris complaints on the internet.

So I told them I wanted to see some results before I spent any more money. After reading that they didn’t pay royalties to quite a few complainants, I realised I couldn’t win. Even if they did fulfill their contract, I probably wouldn’t be paid! I cancelled the last payment I owed. Fortunately I hadn’t organised a launch and ordered books for it. It was to be launched on Australia Day, today. Its raining cats and dogs from an ex Tropical cyclone and we’re about to be cut-off. I do live on a mountain and these things happen from time to time.

I’ve just had a call from my original Xlibris contact and told her that I was wanting some action to fulfill my contract before releasing the final payment. I don’t know why I didn’t say: get nicked! I guess I still hold out hope for this book.

The latest book from author Christine Deacon is a photo and poetry book called Kakadu Dreaming. It relates to the time she worked in Kakadu National Park and features some of the spectacular and unique places, (some are close to the Uranium mine). The poetry explores a spirituality based on a Renewing the Dreaming in a broader context which relates to all Australians. Kakadu Dreaming can be purchased as an ebook or a Softcover edition.

Links to all my books

<!– Start of StatCounter Code for WordPress (either .com or .org) –>

A book of photos and poems from Kakadu National Park.

Will the card parallel the nicer interference?
Using the didgeridoo for aligning or re-aligning the main Chakras is a deep and powerful experience and offers you the opportunity to step into a place of deep integration, balance and relaxation.
Connecting with, and bringing our 7 major Chakras into alignment, is a very powerful experience. This experience with the healing sounds of the didgeridoo will give you the opportunity to tune in and feel more energised, focused and connected to yourself, the Earth and the Cosmos. http://www.facebook.com/events/194855793996089/
Aligning the Chakras with the Didgeridoo
May 21 at 7:00pm in UTC+08
Zakay Glass Creations in Byron Bay, New South Wales

Some rain in Kakadu last few nights means the ‘wet’ season is here! Let’s hope for a big one! Lot’s of storms with ‘Narmargon‘ Lightning Man doing his thing. It’s Gunumeleng season! Check our Twitter for constant updates on road conditions and things to do in Kakadu!