Preparing the NPWS Discovery Van for display in the parade

Whale suit to be worn in the Parade 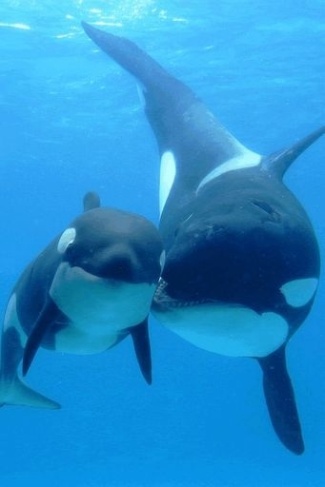 Handshake between species
I’ve been following one of nature’s great phenomena
The Great Whale migration south from the warm waters of Hervey Bay to the shores of Eden.

In the warm waters of Hervey Bay in the lee of Fraser Island, the mother whales come to have their babies and when they are strong enough, make their way down the east coast of Australia on their way to Antarctica. All along the east coast people gather to watch the whales from September as they are on the way south. Eden in southern NSW, once a whaling enterprise, now celebrates their arrival with a parade in early November.

In Twofold Bay Eden men and killer whales worked together to hunt the migrating fin and humpback whales. The killer whales herded the whales into the bay until the whale boat crew arrived. When the whale was harpooned, the killer whales received their reward, feasting on the tongue and lips, the only part of the whale they took.(If you want to read more about it, its in my book Australia Down Under, p 146, available from me in ebook format http://www.christinedeacon.wordpress.com).

So we now celebrate nature’s great migration of the whales by following their passage down the coast. There are lookouts at Hervey Bay, the Gold Coast, Byron Bay, Whale Beach, Sydney Harbour, Wollongong, Merimbula Eden and points in between. I have also written a children’s reader about Killer Whales. If you want to read more, here’s the link:

While in Merimbula I stayed at Indigo, in a magical bushland setting:

Check this out, a humpback whale shows its appreciation to rescuers.

Killer whales frolic in the wake of a couple in Mexico
http://youtu.be/aJo89fHqq0U
► 2:00
http://www.youtube.com/watch?v=aJo89fHqq0U