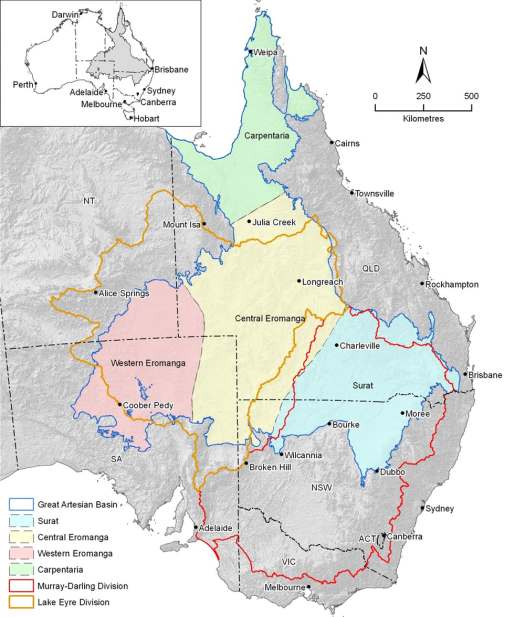 Check out this video on UTube for latest information on progress for conserving the waters of this valuable resource.
https://youtu.be/0g9ITfFskos

https://theconversation.com/water-in-water-out-assessing-the-future-of-the-great-artesian-basin-13104
Research on Great Artesian Basin prior to going to Moree next week.

The Great Artesian Basin is huge and ancient underground “water tank” big enough to fill Sydney Harbour 130,000 times. It streches from Cape York down to Dubbo and further west than Coober Pedy and has been providing the only reliable source of fresh water for rural communities in Queensland, New South Wales, South Australia and the Northern Territory since the first bore holes were sunk in the 19th century. But new interactions between industries such as agriculture, mining and the water itself has prompted the big question: how does the Great Artesian Basin really work?

Great Artesian Basin Water Resource Assessment was released this week. It’s the most comprehensive assessment to date of the Basin’s water flows and physical structure (its hydrology and geology).

Based on research by CSIRO and Geoscience Australia, the assessment provides a substantial update to knowledge about the Basin, benefiting from improved techniques to measure and monitor water movement, and incorporating new methodologies that link a range of “development” and management scenarios. The last assessment of the Basin, which primarily focused on hydrology, was in 1980.

This was a challenging project. Compared to surface water catchments where you can actually see where water is draining, the groundwater systems in the Basin are difficult to visualise, which added complexity to assessing the flow of water.

In fact, the complexity of the geological structures and their role in governing groundwater conditions was one of the big surprises of this assessment.

We had long suspected that faults and ridges in an artesian basin would affect how groundwater moves between aquifers. But we needed to understand how water moves into, out of and around the Great Artesian Basin so we could paint a picture of how the resource is being used, and how much water is likely to be available into the future.

We found that although the Great Artesian Basin and other basins are separate reservoirs, they actually have different levels of connections. Water may be transferred from one of these basins up into the GAB, or from the GAB downwards, or not at all.

The Great Artesian Basin Water Resource Assessment region. CSIRO
So is sufficient water going in to the Basin to replace what is being taken out?

We also factored climate change into our assessments of water replenishment.

By 2070, areas of the Basin along the Great Dividing Range in New South Wales and central to northern Queensland (blue areas on the map above) are predicted to have increased groundwater levels. Much of the western Basin (depicted in red on the map) will likely have lower groundwater levels as a result of very long-term natural decline.

We also found that the rates of recharge to some parts of the Basin, such as on the western side, are naturally quite low and that the Basin’s aquifers are replenished by groundwater flowing from east to west.

It is a little different on the eastern side of the Basin, which is being more actively recharged from the “intake beds”, or the rivers.

It is very difficult to know the precise rates of inflow and outflow for such a complex groundwater basin. Although not all the values are known for certain, it appears that outflows are greater than inflows for most of the Basin. The past century of using artesian water in the eastern side has led to declines of groundwater levels. In some instances, artesian bores and some springs have ceased to flow. This is clear evidence of depleting the resource and has also been the driver for learning more about how the Basin works and how it might respond to future conditions.

There are already processes in place, such as the Great Artesian Basin Sustainability Initiative, to manage the decline in aquifer pressure (and groundwater levels) from over-use. As a result of the capping and piping of original bore drains, some of that pressure has been recovered.

Continued extraction of groundwater from the Basin requires continued measurement of the groundwater levels. Similar to trying to predict the weather, careful and continued observation will help us improve predicting how the GAB will respond to future conditions.

The assessment and its products should help better inform government policy, community and industry decision making. For example, it may be used to guide future targeted bore monitoring by identifying where potential stresses in the Basin might occur. It will also allow for more informed assessments of development proposals by state and Australian government regulators.