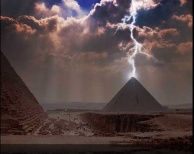 The worlds pyramids have started beaming energy to the mysterious Space clouds, known as the Photon Belt.Several incredible incidents of visible power beams shooting skywards into space towards the regions of the alien Photonic clouds are well documented. And at the same time the world begins to hearing and recording scary sounds. Noises that seem to be coming from the Photonic Cloud AKA the Photon Belt.

And the Mayan pyramid of Kukulkan in Mexico transmitted a column of raw energy into space and was just the latest to do so. In 2009 and 2010 the Bosnian pyramid of the sun beamed a pencil thin ray of pure energy into space towards the Photon Belt. he amazing incident was followed by a vortex blast from the Pyramid of the moon, Teotihuacan, Mexico city. UFO LIGHT BEAM OVER MAYA CHICHEN ITZA PYRAMID When Hector Siliezar visited the ancient Mayan city of Chichen Itza with his wife and kids in 2009, he snapped three iPhone photos of El Castillo, a pyramid that once served as a sacred temple to the Mayan god Kukulkan.

Tourists screamed, others shot hasty videos with their camera phones as the Mayan pyramid rumbled. But no earthquake followed, instead a brilliant beam of light shot skyward into space as awed onlookers gasped, wondering what it meant. But the Mayan pyramid of Kukulkan transmitting a raw column of incredible energy into space was just the latest pyramid to do so. All starting stress waves on Nov.15, 2011 and that a huge energy release”stress waves” signal indicating the transition of the earths internal energy, into a new active phase. The Giza pyramids are beginning to transmit this energy beams as well. Which in return has started the strange sounds that is being heard around the world. These sounds seem to be a direct cause of the inner earth changes including plate movement and is being bounced of the ionosphere all being caused by the photon belt.

Read more about this at: