Today I was at the Optometrist when I tuned into this portrait hanging in his rooms. His energy was very strong and I commented on that to the Optometrist who showed me that the original painting was sculptured to show the tattoos in 3 dimensions. Apparently they didn’t tattoo the eyes, as the windows to the soul. I have never been to New Zealand, so this is all new to me. I’m getting he is a part of my soul group. His energy is still strong, like he is with me. This all seems to be a result of the acupuncture I had earlier in the week which has increased my energy.

Possibly the most well-known Maori portrait painted by Goldie this painting was originally titled “All ‘e Same t’e Pakeha”. It is a portrait of a laughing Te Aho-te-Rangi Wharepu of Ngati Mahuta wearing a bowler hat and European style suit. Goldie himself produced (now very rare) signed prints of this painting whilst he was alive but for many years this image was unavailable as a print due to the reluctance of the painting’s owner for prints to made. In recent years prints of A Good Joke on fine art paper were published by the Capper Press and due to demand for a fine art canvas edition they have released in 2011 this stunning reproduction of the painting that is printed directly onto superb 100% cotton artists’ canvas. It has a black border around the image so it can be wrapped gallery style around a stretcher frame without losing any of the image.

Te Aho o te Rangi Wharepu, or Te Aho for short, was born about 1811 and became a famous tohunga of the Ngati Mahuta.

He was a contemporary of Potatau, the first Maori King, who in his younger days was known as Te Whero Whero, and he accompanied him on many of his campaigns including at least one as far north as Whangarei.

When Potatau, whose name incidently means “doorway to death” in reference to all those who passed that way when they met him on the battlefields, embraced Christianity he commanded Te Aho to lay aside his tohunga craft.

According to his family history he complied with the great chief’s wishes by symbolically laying the devices of his calling on a mat in front of Potatau.

From then on he used his great knowledge of Maori lore to the benefit of his people. He was a noted authority on mythology and an expert on canoe architecture and related culture.

He met and became good friends with C.F. Goldie, whom he visited in Auckland on many occasions.

Goldie’s first portrait of Te Aho was completed in 1902 and was followed with another each year between 1905 and 1913.

The last few, however, must have been copied from photographs because the old chief died in 1910.

Te Aho was also a good friend of the celebrated Govenor Grey, who gifted him 248 acres of land at Maramarua in the Waikato.

Later Te Aho’s daughter, Hutukawa, went to Kawau Island as a companion-help to Grey and lived for some years at Mansion House.

When she eventually married, Grey provided her with a dowry and built a house for her family on the mainland at nearby Matakana, near Warkworth 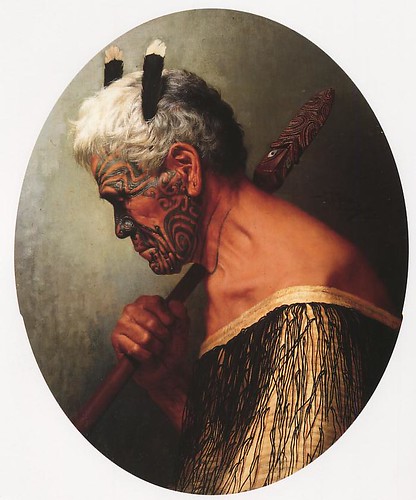