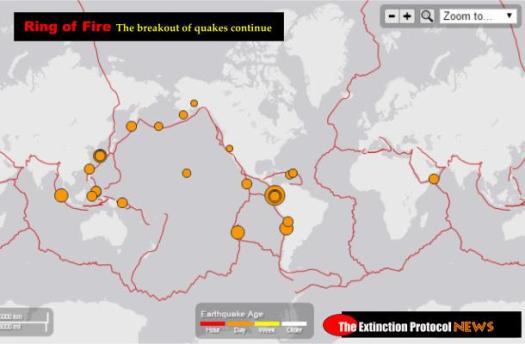 April 2016 – GEOLOGY – Seismic tension continues to mount in the volatile region of the planet known as the Ring of Fire, where more than 90% of the world’s earthquakes occur, and more than 81% of the largest magnitude earthquakes occur. The extraordinary and precipitous rise in the number of large magnitude earthquakes is both astounding and alarming. On average, only about fifteen 7+ magnitude earthquakes strike the planet each year. We’ve had 2 such earthquake in less than 72 hours.
This has continued to baffle many of the world’s leading geologists, who still attest the rise in the number of large earthquakes is merely a random natural occurrence. For instance, the number of large earthquakes doubled in 2014. However, here’s what scientists had to say about it: “If you think there have been more earthquakes than usual this year, you’re right. A new study finds there were more than twice as many big earthquakes in the first quarter of 2014 as compared with the average since 1979.
“We have recently experienced a period that has had one of the highest rates of great earthquakes ever recorded,” said lead study author Tom Parsons, a research geophysicist with the U.S. Geological Survey (USGS) in Menlo Park, California. But even though the global earthquake rate is on the rise, the number of quakes can still be explained by random chance, said Parsons and co-author Eric Geist, also a USGS researcher. Their findings were published online June 21 in the journal Geophysical Research Letters. 1
The average rate of big earthquakes — those larger than magnitude 7 — has been 10 per year since 1979, the study reports. That rate rose to 12.5 per year starting in 1992, and then jumped to 16.7 per year starting in 2010 — a 65 percent increase compared to the rate since 1979. This increase accelerated in the first three months of 2014 to more than double the average since 1979, the researchers went on to report.

Ring of Fire April 17
Why is our planet having so many big earthquakes? It’s because big geological processes are driving the reactive seismic forces that create earthquakes along faults, trenches, and the planet’s many subduction zones. We don’t live on a perfect sphere. We live on a planet that more resembles a cracked egg. Cracked and badly fractured, partially due to its geology but mainly due to the intense heat rumbling within its interior (about 6,000 C and 10,800 F) and the geological dissipative features that try to regulate that heat and resulting kinetic energy. These geologic features include mantle plumes, faults, tectonic plates, submarine vents, and volcanic systems.
In the last 24 hours, moderate earthquakes have struck regions in the far Pacific like Fiji and Tonga, while smaller earthquakes have rattled portions of Japan, Ecuador, Guatemala, Chile, Alaska, California, Indonesia, Puerto Rico and the Virgin Islands, the Adriatic Sea, the Strait of Gibraltar, the Hawaiian Islands, and Greece. Ecuador was struck with a 7.8 magnitude earthquake. Ecuador’s antipodal point is the Sumatra region of Indonesia – which was struck with 5.0, 4.8, and 4.5 magnitude earthquakes in the last 24 hours. You might say the entire planet is now reeling from earthquakes from one end to the other. Where will the next big earthquake strike or how long will this current seismic episode last is anybody’s guess? About the only thing we can be certain of is there will be many more such events and they will increase in both severity and intensity. –Alvin Conway, TEP 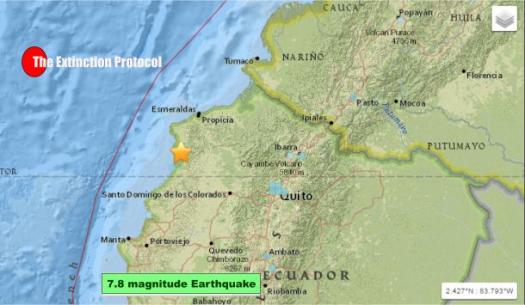 April 2016 – ECUADOR – A 7.8-magnitude earthquake struck on Ecuador’s coast Saturday, leaving at least 235 people dead and 1,500 wounded after causing buildings to shake in cities more than 100 miles away and collapsing an overpass, authorities and witnesses said. The Ecuadorian earthquake was 6 times stronger than the 7+ magnitude earthquake that recently struck the southern island of Japan. The temblor struck just before 7 p.m. local time (8 p.m. ET) with an epicenter 16 miles south-southeast of the coastal town of Muisne, located on the country’s northwestern coast, the U.S. National Geological Survey said. The quake was recorded at a depth of about 12 miles. Ecuador’s Vice President Jorge Glas said 28 people were killed according to initial information.

“Based on preliminary information, there are 16 people dead in the city of Portoviejo, 10 in Manta and two in the province of Guayas,” Glas in…

A lot of concern is being generated around “global warming.” Can we look at what our sources say about the matter? David Suzuki defined global warming in this way: “We have released so much carbon dioxide and other greenhouse gases that our planet’s atmosphere is now like a thick, heat-trapping blanket. By disrupting the atmospheric … 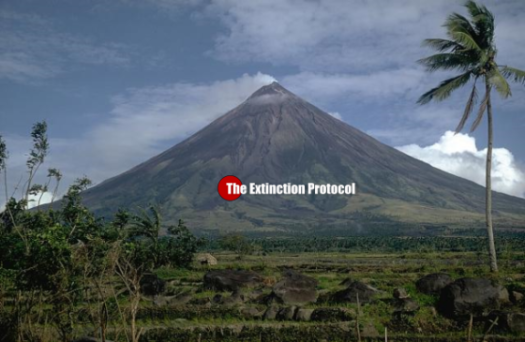 by The Extinction Protocol

December 2015 – PHILIPPINES – The Kanlaon Volcano in Negros Oriental province spewed ash on Saturday afternoon, state seismologists said. In an advisory, the Philippine Institute of Volcanology and Seismology (Phivolcs) said “a low-energy ash eruption” was recorded from 1:01 p.m. to 1:10 p.m. Kanlaon also spewed ashes on Saturday morning starting from 11:40 a.m. to 11:45 a.m.
Last November 25, Kanlaon exploded for 30 minutes which prompted the Phivolcs to raise the alert level over the volcano. Phivolcs said Alert Level 1 meant that Kanlaon Volcano was at an abnormal condition and had entered a period of unrest. Phivolcs has earlier reminded local governments of Negros Oriental and the public not to enter the 4-kilometer radius permanent danger zone due to the further possibilities of sudden and hazardous eruptions. Kanlaon Volcano, which has an elevation 2,435 meters, has erupted 26 times, making it one of the most active volcanoes in the Central Philippines. –Inquirer

71: Ash emissions and growing unrest at East Java volcano in Indonesia
by The Extinction Protocol

December 2015 – EAST JAVA, Indonesia – Activity at the volcano has increased during the past two weeks. Ash emissions of fluctuating intensity began early December and have been near-continuous. On 7 December, a narrow plume extended 150 km south from the volcano. The past few days, the ash emissions have been weaker and mainly drifted westwards, causing Malang’s airport in only 30 km distance to close down temporarily. –Volcano Discovery

December 2015 – GUATEMALA – The activity at Fuego might be picking up towards a new paroxysm (eruptive phase with strongly increased effusion rate, resulting in lava fountaining and lava flows). We camped on the SW side of the volcano last night, and observed mild to strong strombolian explosions that occurred at intervals between 1 and 10 minutes. The strongest explosions sent incandescent material to heights of up to approx. 500 m and similar distances. One particularly intense explosion was accompanied by a very strong shock wave.
Although not seen directly from our location, a pyroclastic flow occurred around 10:15 (local time): we observed the co-ignimbrite ash plume rising from what was likely a collapse of a new lava flow on the southern slope. According to staff at the Panimache volcano observatory, who confirmed our observation, the pyroclastic flow could have reached a length of 7 km and seems to herald the start of the 14th paroxysm of Fuego in 2015… Following the initial sighting of the brownish ash plume, it gradually spread around the whole southern slopes and caused fine ash fall in the area lasting about 2 hours, graying all vegetation. –Volcano Discovery

January 2016 – GEOLOGY – A magnitude 6.3 earthquake struck in the South Pacific Ocean about 650 miles (1,045 kilometers) south of the Australian island state of Tasmania, according to the U.S. Geological Survey. The temblor, which struck at about 1 p.m. Sydney time at a depth of 8 kilometers, was detected by more than 50 stations on the Australian mainland, Geoscience Australia said. No tsunami warning was issued. -Bloomberg

New Zealand: An earthquake measuring 5.4 on the Richter scale jolted 122 km south of Raoul Island, New Zealand at 21:29 GMT on Thursday, the US Geological Survey said. The epicenter, with a depth of 17.96 km, was initially determined to be at 30.3739 degrees south latitude and 177.9706 degrees west longitude. –Manila Times 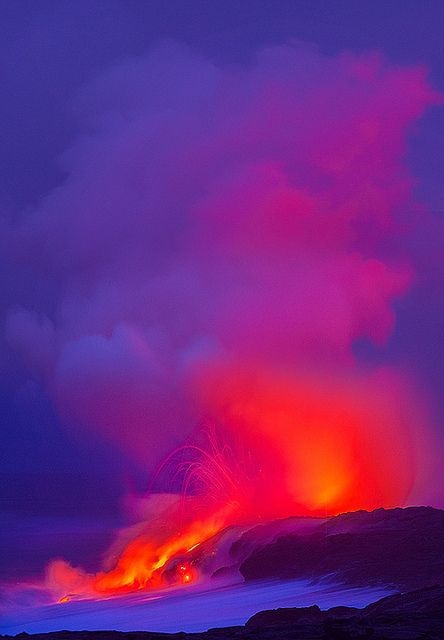 It seems there’s been a further spate of earthquake activity last month with a large number of small quakes on the San Ramon faultline and more on the Ring of Fire, in Chile.There’s also been a huge increase in earthquakes in Oklahoma.

November 2015 – SAN FRANCISCO, CA – A total of 583 small earthquakes have shaken San Ramon, California, in the last three weeks or so – more than five times the record set 12 years ago, according to the latest US Geological Survey updates. “It’s the swarm with the largest number of total earthquakes in San Ramon,” said USGS scientist David Schwartz, who is more concerned about the size of quakes than he is the total number of them. Still, the number tops the previous record set in 2003, when 120 earthquakes hit over 31 days, with the largest clocking in at a magnitude of 4.2.
The largest magnitude earthquake in the current swarm, which began on Oct. 13, is a magnitude 3.6. In 1990, a total of 351 earthquakes struck in Alamo, about 30 miles east of San Francisco, over 42 days, with the largest recorded at a magnitude of 4.4. But Schwartz said those numbers might be inaccurate, as technology back then wasn’t as sophisticated. Despite the nearly 600 quakes that have hit San Ramon in the last month, no injuries or damage have been reported. And the USGS noted that activity has been relatively quiet for the last couple of days. –NBC Bay Are

Chile earthquake:
Magnitude-6.8 tremor strikes area that suffered tsunami in September
by The Extinction Protocol
6.8 magnitude quake
November 2015 – CHILE – The 6.8 magnitude earthquake hit the north-central Coquimbo region at a depth of 36 kilometers at 4:31am local time (6:31pm AEDT), the US Geological Survey (USGS) said, but the Pacific Tsunami Warning Centre did not issue an alert. The epicenter was close to the coast, 47 kilometers from the city of Ovalle and nearly 300 kilometers north of Chile’s capital Santiago. Buildings reportedly swayed in capital city of Santiago, but no tsunami alert has been issued. ONEMI, the national emergency service, initially said that there was the possibility of a “minor tsunami,” but a few minutes later called off the warning.
Chile is no stranger to earthquakes. In September, the same area of the country was hit by a magnitude-8.3 earthquake and tsunami that left 15 dead and over 16,000 homeless. In February 2010, an 8.8-magnitude quake off the southern Chilean coast killed more than 500 people and inflicted an estimated $30 billion in damage.
Chile lies on what is known as the Ring of Fire — an arc of fault lines that circles the Pacific Basin and is prone to frequent earthquakes and volcanic eruptions. The country has long put in place anti-seismic engineering systems, applying a technique known as seismic isolation, or base isolation to protect buildings from the Earth’s tremors. ONEMI has also been leading a big push to educate the population, organizing frequent drills and visiting schools to simulate earthquake situations. –ABC News