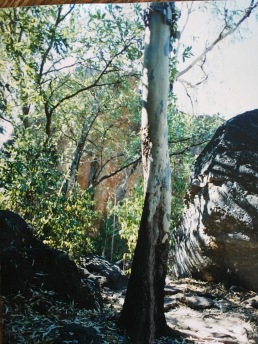 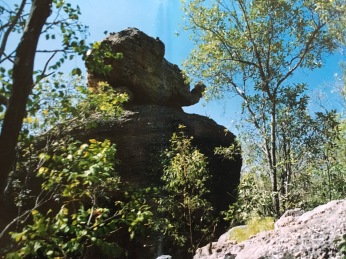 Opening the Kakadu Portal
Kakadu is a remote area 250 kilometres from Darwin in the Northern Territory. It abuts Arnhem Land and provides a buffer from Aboriginal land to the north and east. My daughter and I lived there in 1991 and now Ron and I were returning to Nourlangie Rock site of some of the oldest art in Australia, 40,000 years old

We began by viewing Namarrkun the lightning man who carries the lightning across his shoulders and strikes thunder off the clouds with stone axes attached to his knees, elbows and head. From there we climbed on a track up Noulangie Rock and I found a spot where I wanted to tone and sit and meditate. I called out to Ron to watch as I could feel the energy overshadow me. I asked to be an instrument of what needed to be done.

In a deep meditative state, I heard someone come up behind me through the rustling leaves. There was the sound a key turning in a lock. I saw a large old fashioned key and the sound of a heavy door opening with an echo. I got the impression it was in a crevice in between two rocks.

My rational mind was still active and I thought: `I don’t remember seeing a door there’. Then someone went inside. I opened my eyes briefly and saw Ron but no doorway, so I closed them again. Then I saw that space craft were coming down here. Ron saw me surrounded by brilliant white light. There was a strong humming noise coming from inside the rock, like an engine running. At some point I got a symbol I believe was the Ashtar Command symbol, so did Ron. Yesterday he had a vision of the white light and saw us going aboard a space craft which he described as a triangle within a circle.

When we came back and grounded ourselves we drank a litre of water. (Linda had rung to suggest we take this, just before we left). Then I went to Anbangbang Billabong where Ron said I was to paint Nourlangie which I did. (Linda has this painting).

Later I remembered there had been a beam of light going straight up. These are laser light triangulation points for craft coming in. There were one or two more for us to discover (one at Ubir and another at UDP Falls)
I really did not know what to make of this experience. Later in Perth I had an explanation: `You are both light workers and your energies are very similar – an old master. You went through a golden gateway into the light. You did indeed open a portal at Kakadu that the angels and archangels and other dimensional levels are all waiting to come through when needed. You went through the portal and came back

I felt my experience at Nourlangie was similar to James Twyman in ` Emissary of Light”. I asked and got yes I had gone through the doorway of light I’d been seeing it in meditation and wanted to go through it again. I was told compassion patience and gratitude are the way.

‘Visualize the doorway about 3 metres in front of you and allow the light from your heart to disappear in the opening. Allow the door to take you. Let it pull you out of time into eternity. Let your desire grow strong and increase until you feel you must go to it. Don’t be afraid’