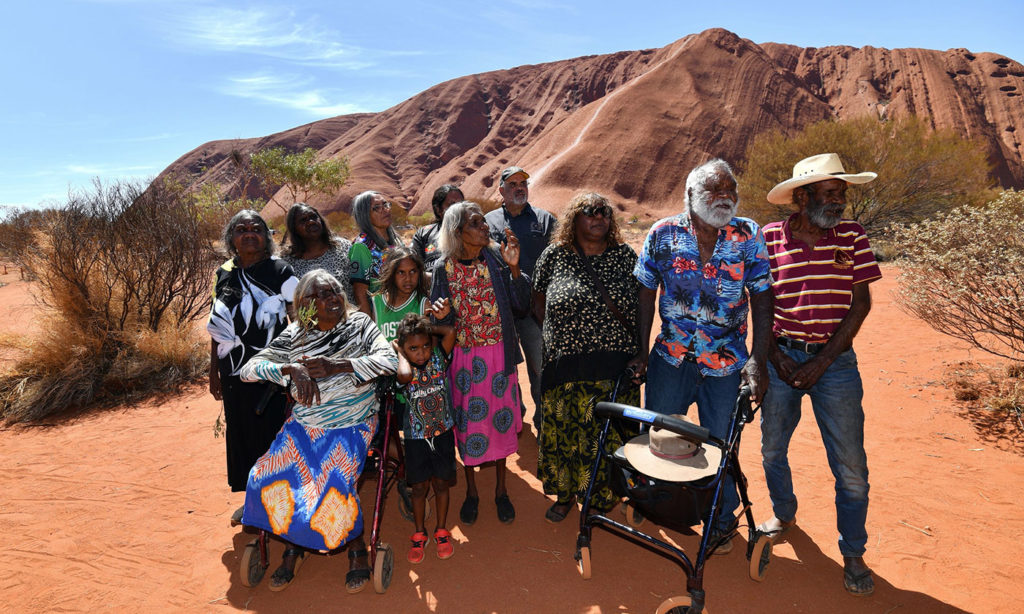 The Anganu, traditional Aboriginal owners of Uluru-Kata-Tjuta in the Northern Territory, gather in front of the Uluru, also known as Ayers rock, after a permanent ban on climbing on October 26, 2019. The Anganu lobbied for the closure of the walking track because it undermined the landmark’s spiritual significance. Photo by Saeed Khan/AFP/Getty Images.

Strength From Grief: How Aboriginal People Experience the Bushfire Crisis

How do you support people forever attached to a landscape after an inferno tears through their homelands: decimating native food sources, burning through ancient scarred trees, and destroying ancestral and totemic plants and animals?

The fact is, the experience of Aboriginal peoples in the fire crisis engulfing much of Australia is vastly different from that of non-Indigenous peoples.

Colonial legacies of eradication, dispossession, assimilation, and racism continue to affect the lived realities of Aboriginal peoples. Added to this is the widespread exclusion of our peoples from accessing and managing traditional homelands. These factors compound the trauma of these unprecedented fires.

As Australia picks up the pieces from these fires, it’s more important than ever to understand the unique grief that Aboriginal peoples experience. Only through this understanding can effective strategies be put in place to support our communities to recover.

Aboriginal peoples live with a sense of perpetual grief. It stems from the as-yet-unresolved matter of the invasion and subsequent colonization of our homelands.

While many instances of colonial trauma were inflicted upon Aboriginal peoples—including the removal of children and the suppression of culture, ceremony, and language—dispossession of Country remains paramount. Dispossessing people of their lands is a hallmark of colonization.

Australian laws have changed to partially return Aboriginal peoples’ lands and waters, and Aboriginal people have made their best efforts to advocate for more effective management of Country. But despite this, most of our peoples have been consigned to the margins in managing our homelands.

Aboriginal people have watched on and been ignored as homelands have been mismanaged and neglected.

Oliver Costello is chief executive of Firesticks Alliance, an Indigenous-led network that aims to reinvigorate cultural burning. As he puts it:

Since colonisation, many Indigenous people have been removed from their land, and their cultural fire management practices have been constrained by authorities, informed by Western views of fire and land management.

In this way, settler-colonialism is not historical, but a lived experience. And the growing reality of climate change adds to these anxieties.

It’s also important to recognize that our people grieve not only for our communities, but for our nonhuman relations. Aboriginal peoples’ cultural identity comes from the land.

As such, Aboriginal cultural lives and livelihoods continue to be tied to the land, including landscape features such as waterholes, valleys, and mountains, as well as native animals and plants.

The decimation caused by the fires deeply affects the existence of Aboriginal peoples and, in the most severely hit areas, threatens Aboriginal groups as distinct cultural beings attached to the land. As The Guardian’s Indigenous affairs editor Lorena Allam recently wrote:

Like you, I’ve watched in anguish and horror as fire lays waste to precious Yuin land, taking everything with it—lives, homes, animals, trees—but for First Nations people, it is also burning up our memories, our sacred places, all the things which make us who we are.

For Aboriginal people then, who live with the trauma of dispossession and neglect and now, the trauma of catastrophic fire, our grief is immeasurably different from that of non-Indigenous people.

As we come to terms with the fires’ devastation, Australia must turn its gaze to recovery. The field of community recovery offers valuable insights into how groups of people can come together and move forward after disasters.

But an examination of research and commentary in this area reveals how poorly non-Indigenous Australia (and indeed, the international field of community recovery) understands the needs of Aboriginal people.

The definition of “community” is not explicitly addressed, and thus is taken as a single sociocultural group of people.

But research in Australia and overseas has demonstrated that for Aboriginal people, healing from trauma—whether historical or contemporary—is a cultural and spiritual process, and inherently tied to land.

The culture-neutral standpoint in community recovery research as yet does not acknowledge these differences. Without considering the historical, political, and cultural contexts that continue to define the lives of Aboriginal peoples, responses to the crisis may be inadequate and inappropriate.

Resilience in the face of ongoing trauma

The long-term effects of colonization has meant Aboriginal communities are (for better or worse) accustomed to living with catastrophic changes to their societies and lands, adjusting and adapting to keep functioning.

Experts consider these resilience traits as integral for communities to survive and recover from natural disasters.

This is a salient lesson for agencies and other nongovernment organizations entrusted to lead the disaster recovery process.

The community characteristics that enable effective and timely community recovery, such as close social links and shared histories, already exist in the Aboriginal communities affected.

The agency in charge of leading the recovery in bushfire-affected areas must begin respectfully and appropriately. And they must be equipped with the basic knowledge of our peoples’ different circumstances.

It’s important to note this isn’t “special treatment.” Instead, it recognizes that policy and practice must be fit-for-purpose and, at the very least, not do further harm.

If agencies and non-government organizations responsible for leading the recovery from these fires aren’t well-prepared, they risk inflicting new trauma on Aboriginal communities.

The National Disability Insurance Agency offers an example of how to engage with Aboriginal people in culturally sensitive ways. This includes thinking about Country, culture, and community, and working with each community’s values and customs to establish respectful, trusting relationships.

The new bushfire recovery agency must use a similar strategy. This would acknowledge both the historical experiences of Aboriginal peoples and our inherent strengths as communities that have not only survived, but remain connected to our homelands.

In this way, perhaps the bushfire crisis might have some positive longer-term outcomes, opening new doors to collaboration with Aboriginal people, drawing on our strengths and values, and prioritizing our unique interests.

This article was originally published by The Conversation. It has been republished here with permission.

You may recall that back at the end of May this year, we provided an analysis of the first three transmissions by Cosmic Agency of their conversations with a group of Pleiadians from the planet Taygeta. Their spokesperson goes by the name of Svaaru, and she’s been communicating with Gosha who makes the videos for Cosmic Agency.

Links to those analyses are below this relatively short video. This information certainly brings more questions.  As always, exercise discernment, take what resonates and leave the rest.

For those who prefer to speed-read, here’s a brief, bullet pointed summary ~

The National Institute for Space Research (Inpe) said its satellite data showed an 84% increase on the same period in 2018.

It comes weeks after President Jair Bolsonaro sacked the head of the agency amid rows over its deforestation data.

The largest rainforest in the world, the Amazon is a vital carbon store that slows down the pace of global warming.

It is also home to about three million species of plants and animals, and one million indigenous people.

Conservationists have blamed Mr Bolsonaro for the Amazon’s plight, saying he has encouraged loggers and farmers to clear the land, and scientists say the rainforest has suffered losses at an accelerated rate since he took office in January.

Meanwhile, the US space agency NASA, said that overall fire activity in the Amazon basin was slightly below average this year.

The agency said that while activity had increased in Amazonas and Rondonia, it had decreased in the states of Mato Grosso and Pará.

It was earlier reported that a blackout on Monday in the city of São Paulo – more than 2,700km (1,700 miles) away – had been caused by smoke from the Amazon fires.

But some meteorologists say the smoke came from major fires burning in Paraguay, which is much closer to the city and not in the Amazon region.

Why are there fires in the Amazon?

Wildfires often occur in the dry season in Brazil but they are also deliberately started in efforts to illegally deforest land for cattle ranching.

Inpe said it had detected more than 74,000 fires between January and August – the highest number since records began in 2013. It said it had observed more than 9,500 forest fires since Thursday, mostly in the Amazon region.

The satellite images showed Brazil’s most northern state, Roraima, covered in dark smoke, while neighbouring Amazonas declared an emergency over the fires.

Mr Bolsonaro brushed off the latest data, saying it was the “season of the queimada”, when farmers use fire to clear land. “I used to be called Captain Chainsaw. Now I am Nero, setting the Amazon aflame,” he was quoted by Reuters news agency as saying.

Later he appeared to suggest that non-governmental organisations had set fires, as revenge for his government slashing their funding. He presented no evidence and gave no names to support this theory, saying there were “no written records about the suspicions”.

“So, there could be…, I’m not affirming it, criminal action by these ‘NGOers’ to call attention against my person, against the government of Brazil. This is the war that we are facing,” he said in a Facebook Live on Wednesday.

Inpe noted that the number of fires was not in line with those normally reported during the dry season.

“There is nothing abnormal about the climate this year or the rainfall in the Amazon region, which is just a little below average,” Inpe researcher Alberto Setzer told Reuters.

“The dry season creates the favourable conditions for the use and spread of fire, but starting a fire is the work of humans, either deliberately or by accident.”

Ricardo Mello, head of the World Wide Fund for Nature (WWF) Amazon Programme, said the fires were “a consequence of the increase in deforestation seen in recent figures”.

Why is Bolsonaro being criticised?

The reports of a rise in forest fires come amid criticism over Mr Bolsonaro’s environmental policies. Scientists say the Amazon has suffered losses at an accelerated rate since the president took office in January, with policies favouring development over conservation.

Over the past decade, previous governments had managed to reduce deforestation with action by federal agencies and a system of fines. But Mr Bolsonaro and his ministers have criticised the penalties and overseen a fall in confiscations of timber and convictions for environmental crimes.

Last month, the far-right president accused Inpe’s director of lying about the scale of deforestation in the Amazon and trying to undermine the government. It came after Inpe published data showing an 88% increase in deforestation there in June compared to the same month a year ago.

The director of the agency later announced that he was being sacked amid the row.

Inpe has previously insisted that its data is 95% accurate. The agency’s reliability has also been defended by several scientific institutions, including the Brazilian Academy of Sciences.