What gives lightworkers as a movement focus is service to the Divine Mother in the matter of the planetary consciousness shift generally called “Ascension.”

What is this shift?

It’s one that will leave all individuals in a state that enlightened sages call moksha, mukti, or liberation from physical birth and death.  Liberation is a synonym for Ascension.

Individuals must have agreed to ascend and must have the necessary light quotient in their being that would allow them to exist in a more refined environment.

Life lived prematurely in a higher-vibrating realm would feel intolerable to them, as afterlife communicator T.E. Lawrence (Lawrence of Arabia) reports of the Astral Plane (or Fourth Dimension of the afterlife):

“Each group makes its own conditions and these are for the time being the only conditions in which its members can exist in comfort.

“Whatever our natural plane may be, to go down from it causes acute discomfort and even suffering; to go up before one is ready means an air too rarified and light too intense to be borne.

“So each must go to his own place and stay there until development draws him up into a higher sphere.” (1)

On this side of the veil, Sri Ramana Maharshi called the stage of enlightenment that is meant by Ascension, “Sahaja Samadhi.”

“The Sahaja Nirvikalpa [Samadhi] is permanent and in it lies liberation from rebirths.” (2)

Is this the end of he movie, the final reel?

Not by any stretch of the imagination.

Even something as revolutionary to our being as Ascension, it turns out, is still just one among many stages of enlightenment.

“A certain Sage…, speaking of unfolded Consciousness above the level of the highest human Adepts, said:

“‘We attain glimpses of Consciousness so Transcendent, rising level upon level, that the senses fairly reel before the awe-inspiring Grandeur.’

“Here, certainly, is space for evolution far beyond the highest possibility of man as man.” (3)

“Truly, within the Infinite there are Mysteries within Mysteries, Deeps beyond Deeps, Grandeurs beyond Grandeurs. … Mystery of Mysteries, reaching inward and outward, but ever Beyond!

“And from that Beyond ever there come new whisperings of other imponderable Glories. Ah! How little is this world at the beginning of the Trail, barely a point in a Space of unlimited dimensions!” (4)

On that long and blissful journey to “Deeps beyond Deeps,” we’re about to take what may be the one of the most significant steps – from the straitened circumstances of the dualistic, unbalanced Third/Fourth Dimension to abundant circumstances (abundant in love and joy) of the unitive, blissful Fifth.

Our vibrations will rise in refinement in much the same way as we go up an elevator. We’ll find ourselves on another floor of the building.

Both of them had to shed the body to ascend. But not us. We ascend with our bodies, which is the predominant reason, I think, why Ascension has to be for the most part gradual.

Serving the Ascension of Gaia and her inhabitants is the common thread among lightworkers. Beyond that, some are building Nova Earth. Others are working with the collective grids and consciousness. Some are transmuting energy. Others are ensuring world peace. And so on the specialized tasks go.

But all is in preparation for and leads to the grand finale of Ascension.

Afterlife communicator Mike Swain agrees: “The worlds above us are even richer in light and happiness. If I go up there (and I can) I find it too bright; the light hurts my eyes. And the vibrations are so refined that I can’t respond to them!

“So I reverse gear and return to this world – which suits me just fine!

“The planes below this one are denser, dimmer planes. If I go down to them, it becomes murkier and murkier until it is so creepy that I scoot back to where I belong!” (Mike Swain in Jasper Swain, From My World to Yours: A Young Man’s Account of the Afterlife. New York: Walker, 1977, 24.)

(3) Franklin Merrell-Wolff, Pathways Through to Space. A Personal Record of Transformation in Consciousness. New York: Julian Press, 1973, 17. I think of “man beyond man” today as humanity beyond the Twelve Dimensions.

Gautama Buddha[note 3] (c. 563/480 – c. 483/400 BCE), also known as Siddhārtha Gautama,[note 4] Shakyamuni Buddha,[4][note 5] or simply the Buddha, after the title of Buddha, was an ascetic (śramaṇa) and sage,[4] on whose teachings Buddhism was founded.[5] He is believed to have lived and taught mostly in the eastern part of ancient India sometime between the 6th and 4th centuries BCE.[6][note 6] 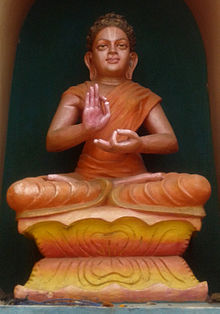 Buddha as an avatar at Dwaraka Tirumala temple, Andhra Pradesh.

Gautama taught a Middle Way between sensual indulgence and the severe asceticism found in the śramaṇa movement[7] common in his region. He later taught throughout other regions of eastern India such as Magadha and Kosala.[6][8]

Archangel Michael on the Process of Co-Creation
May 14, 2018 By Steve Beckow

Again, knee deep in research, I came across a passage from Archangel Michael in which he describes the process of co-creation with one of his human servants.

Archangel Michael in a personal reading with Steve Beckow through Linda Dilllon, Feb. 20, 2017.)

Archangel Michael: You have been learning in a very practical way the process of co-creation with us.

AAM: It is not an esoteric study, although you also note that we have led you back to some of the more esoteric material, but also the co-creation process because you need to know this.

As you go forth in the co-creation with us and on our behalf, by the way, of Nova Earth in physicality, it is important to know the practicality of that process as well.

So often I have said to thee, “Follow your heart. What is your greatest desire? What is your grand passion?” These are important because you aren’t led and planted or directed to a deep heart desire if it is not part and parcel of the journey that you have, can we say, roughed out prior to your arrival.

And that roughing out of the plan, of course, has been done in tandem with all of us. So it is not a singular plan. And then that plan of course has been interwoven into the greater tapestry of the Mother.

So often humans tend to think that co-creation requires work. And “work” in your terminology has a sense of burden and drudgery, responsibility and heaviness.

Whereas for us when we talk about work it is not a term that is laden with all those things because our work is our passion. Our work, as you would think of it, is our joy. So we don’t really go to work.

We tend to look at one another in the esoteric sense and say, “Well, what do you want to do today?” And that is also an ingredient of Nova Earth.

Now the human capacity tends to be quite stuck in duality where you are either working or you are taking time off. And in taking time off in that limited sense, you have to divvy it up in terms of spiritual work, or relationship, or play, or staring at the wall, etc.

Whereas in truth everything is unified and everything, in terms of your concept of a day or time, is in co-creative flow.

So you have been engaged in understanding this co-creative process because as you become more busy – and that is a given – when we say busy we do not want to imply, “preoccupied.” When you are preoccupied or distracted, you stop the flow of creation.

So it is about being present – yes, attending to whatever needs to be attended to, whether it is having a shower or buying a building – but it is not being distracted by that. You have this expression of “being in the flow.”

But in truth you (and when I say “you” I mean the human collective but particularly at the head of that parade are the lightworkers) are learning more about the joy, the pleasure, the ease, the grace of being in the flow.

And being in the flow is about creation and co-creation.