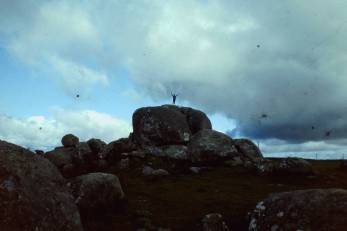 Thunderbolt was a bushanger in the New England area of NSW. He was born Frederick Ward and married the Aboriginal Mary Ann and had several children. Much of the information about them has been hidden, partially as a result of conditions at the time and partly to protect the innocent. My great-grandmother Anne Alicia Ward always spoke highly of Thunderbolt and wouldn’t have a word spoken against him. Her daughter who was my grandmother Ruby Saunders (later Prigge) followed this tradition. So I grew up with stories of Thunderbolt the gentleman bushranger.

At some point in the 1980’s I decided to explore the records, and determine if I was related to him and the result was I became so engrossed I wrote a film script about him and his Aboriginal wife Mary Ann. In 1987 I embarked on an expedition to the New Emgland area where I followed his footsteps.
Here’s an extract from the diary I wrote at the time. I was looking for Thunderbolt’s Leap which was a famous incident where he leap a chasm on a horse which was generally believed to be impossible.
‘Bakers Creek
We headed for Hillgrove. It was in the gorges behind that Thunderbolt took Mason after he had been shot. The Bakers Creek Falls were a surprise. After fairly flat country, in a precipitous gorge which seemed totally impassable to horses. There wasn’t any water going over the falls but usually from September to February thunderstorms fill the gorge with fast flowing water.

When we got to Hillgrove I asked the mine surveyor John Welch how we could get into the gorge. He offered to help and took us down to see the old gold mines including `Sunlight’ mine. Vinegar Spur is the only possible access down from the Metz side. The ground is loose shale about 1 in 2 gradient. The fall is 500 metres. On the other side is another spur which we drove down with hairpin turns and backing down some sections we got down to the river in 4WD. The Chinaman’s Flat area at the bottom is a wildlife haven with wallabies abounding and a few half wild cattle which make their way down and some escaped goats.’

The film script has never been produced. I did send it to Bruce Beresford at one point, I think it deserves to see the light of day. so here are the links: http://share.cx.com/HFRgzV

2 thoughts on “Thunderbolt the bushranger and Mary Ann”